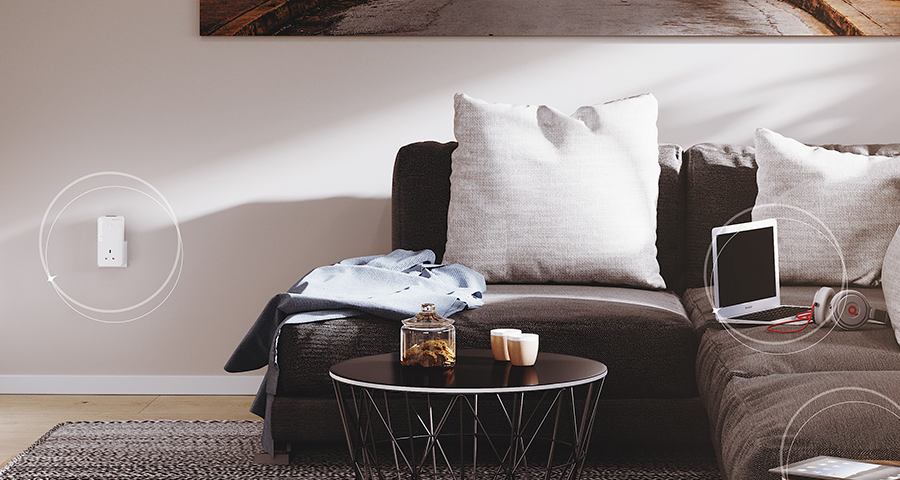 Aachen, Germany, 19 June 2019 – WLAN, WiFi or Wi-Fi? They all refer to the same thing: the wireless network that has become a central part of our everyday lives. The basic technology behind Wi-Fi is celebrating a big birthday - with the Wi-Fi Alliance® celebrating 20 years of Wi-Fi in June. It was also "World Wi-Fi Day" on the 20th June 2019. This was the perfect occasion for devolo's network experts to explain what the various abbreviations and cryptic names, like what 802.11a is all about and what the future of wireless networking looks like.

How it all began

When we're watching TV in the evening, we use our tablets to look up which films or series we know a certain actor from. Out and about, we use our smart phones to check our emails. And when we're lying in bed at night, we use our laptops to stream the latest shows. Network cables are the last thing on our minds during all this. After all, virtually all modern terminal devices—from smartphones and game consoles to streaming set-top boxes—are capable of wireless communication with networks. In Germany, this wireless network is known as WLAN (Wireless Local Area Network). Internationally, it's commonly known as WiFi or Wi-Fi, a trademark introduced by the Wi-Fi Alliance. However, these terms don't mean exactly the same thing. WLAN refers to a wireless network in general. Wi-Fi (or WiFi) refers specifically to a wireless network made out of components based on the 802.11 standards put in place by the Institute of Electrical and Electronics Engineers (IEEE).

In 1999, the IEEE 802.11a standard laid the foundation for future Wi-Fi standardisation. The standard's corresponding certification for terminal devices did more than just ensure compatibility between products from various manufacturers. It also made it possible to achieve a gross data rate that was much higher than the original IEEE 802.11 standard.

The Wi-Fi Alliance was—and still remains—the driving force behind this progress. Looking back at the last 20 years of development shows us just how quickly Wi-Fi has become a permanent fixture in our daily lives:

The evolution of Wi-Fi – More speed and stability

Wi-Fi owes its smashing success to advances in technology and how swiftly technology evolves. 802.11a was followed by the 802.11b, 802.11g, and 802.11n standards: The added standards reflect frequency band upgrades—and the higher transmission speeds they bring. 802.11b delivers gross data rates as high as 11 Mbps on the 2.4 GHz band. 802.11g uses the same band but allows for gross data rates as high as 54 Mbps. 802.11n uses either the 2.4 GHz band or the 5 GHz band. This standard's dual-band functionality makes it possible to achieve rates of up to 600 Mbps using MIMO transmission.

Standardised development has always been highly advantageous in that it allows for compatibility among the different standards. That means that 802.11n is completely compatible with 802.11g and 802.11b networks. As a result, Wi-Fi systems can be used without issues despite increasing transmission speeds and continuous improvements to stability for users. Needless configuration effort and potential communication problems between terminal devices are issues that we no longer have to deal with—and that ultimately helped us usher in the current era of wireless connectivity.

The current state of the art of technology is the IEEE 802.11ac standard. This standard is an innovation from recent years; its transmission speed can theoretically reach 6.9 Gbps. Such a tremendous increase is possible because the technology features greater coverage of transmission channels up to 160 MHz and as many as eight antennas that can respond at the same time. These high-powered specs of this set-up provide higher connection stability and transmission speeds that rival Gigabit Ethernet connections.

"Only cable connections are truly fast" is something people used to say to dismiss Wi-Fi connections. But that statement has been outdated for quite some time now. The simple truth is that Fast Ethernet connections at 100 Mbps are fast enough to allow terminal devices to use almost any conventional home Internet connection without any loss. And achieving this speed is no problem for today's Wi-Fi networks under normal conditions. But for connections within a local network (a NAS server, for example) cable solutions can still have advantages. For now, anyway. The evolution of Wi-Fi is far from finished. In fact, quite the opposite.

The next stage in Wi-Fi evolution is 802.11ax. Or maybe we should be saying "Wi-Fi 6", since the Wi-Fi Alliance decided to call it quits with the cryptic names before launching the newest standard. This means that Wi-Fi 6 is synonymous with 802.11ax, while Wi-Fi 4 and Wi-Fi 5 have replaced the names 802.11n and 802.11ac, respectively.

Wi-Fi 6 is set to mark another performance boost in wireless connection quality. The standard uses both the 2.4 and 5 GHz frequency bands. It considerably increases efficiency and reduces latency times using the OFDMA (Orthogonal Frequency-Division Multiple Access) digital modulation method. In addition, Wi-Fi 6 allows more data to be sent and received at one time. Thanks to these improvements, the theoretical data rates of Wi-Fi 6 are just under 10 Gbps. The Wi-Fi 6 standard provides a particular efficiency boost in environments where several devices are connected to the wireless network.

Wi-Fi is something that our homes—and our entire lives—have grown to depend on. As a result, we become that much more frustrated when obstacles like concrete walls, steel-reinforced roofs or modern in-floor heating interfere with the signal. The most powerful Wi-Fi networks are the ones that combine the best of two worlds: Powerline technology and Wi-Fi. Powerline technology uses existing power lines to transmit data. This set-up means that physical obstacles are easily bypassed and the Internet signal is brought directly to where the user requires a new Wi-Fi access point. devolo's Magic adapters feature tremendous power and rely on the latest Powerline generation. They are available in two versions: devolo Magic 1 WiFi (transmission speeds up to 1,200 Mbps) and devolo Magic 2 WiFi (transmission speeds up to 2,400 Mbps). If you want to set up a new home network, the Starter Kit with two adapters is a great option. The recommended retail price is 199.90 euros for devolo Magic 2 Wi-Fi and 149.90 euros for devolo Magic 1 Wi-Fi. The adapters are also available individually so that you can add them to your Magic network as you see fit. 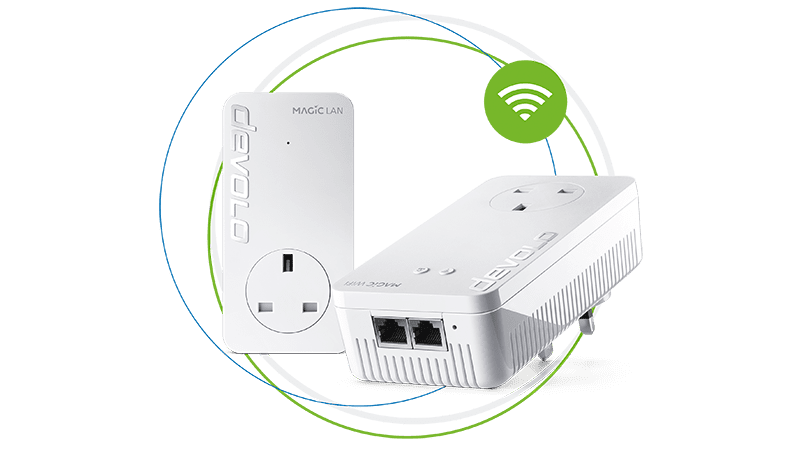 Your permission may be revoked at any time.